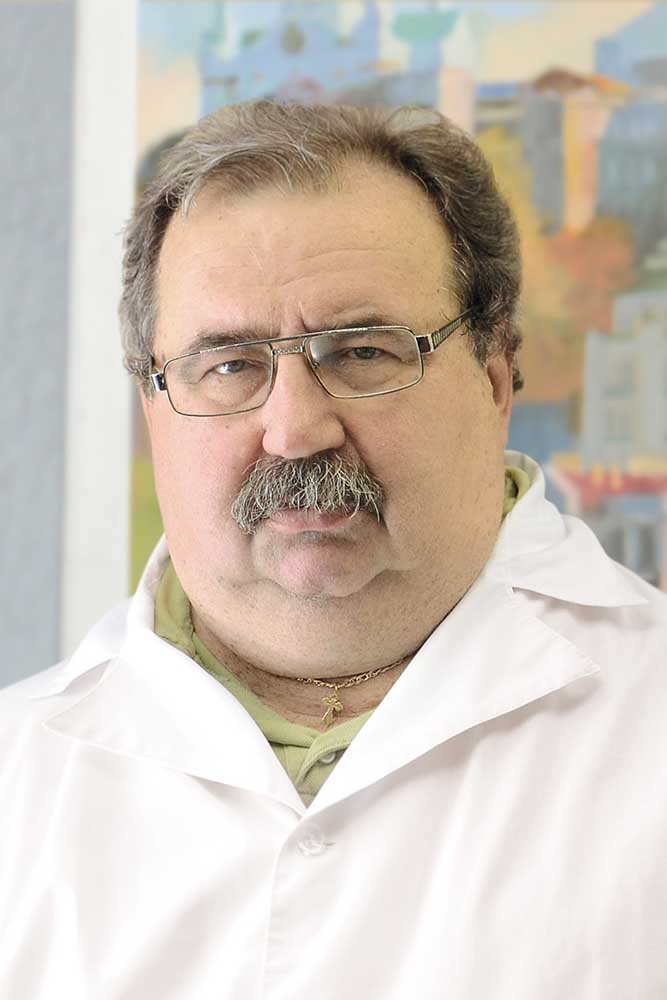 Dissertations, defended under the advisor of Professor V. Povoroznyuk

1988 – Defence of PhD thesis “Degenerative-dystrophic changes of the cervico-thoracic spine and their visceral manifestations (vertebrogenic cardialgiae) in people of various ages”.

In 1993, Vladyslav Povoroznyuk initiated the ongoing Ukrainian epidemiological study of various population groups affected by osteoporosis and its complications. The frameworks of this study included peak bone mass formation in the Ukrainian children and adolescents, the rates of bone loss among the man and women of various ages. He masterminded the creation of reference database for the bone tissue of the Ukrainian population using the X-ray and ultrasound densitometry. Vladyslav Povoroznyuk anchored the research in prevalence of osteoporosis and its complications among the Ukrainian population, age and sexual features, exogenic and endogenic factors influencing the bone tissue. The new diagnostic methods of evaluating the rate of bone ageing were developed, the first automated “Osteolog” work station created, the bio-active supplements preventing the osteoporosis occurrence produced, the regional centers of osteoporosis prevention and treatment all put into place due to his efforts.

In 1995, along with the European branch of the Association of Gerontologists Vladyslav Povoroznyuk developed the syllabus of the professional training course “The fundamental problems of the geriatric orthopedics” to be held annually in the regions of Ukraine.

Since 1996, there are annual scientific-practical conferences on osteoporosis, since 1997 – a series of workshops “The fundamental problems of osteoporosis”, all of them held in the regions of Ukraine.

Besides that, Professor Povoroznyuk initiated the creation of Patients’ Society “Ukraine without osteoporosis and fractures”. Both organizations are actively involved in the annual International osteoporosis days and other patient-oriented events.

Professor Povoroznyuk promoted the development of the counterpart associations of osteoporosis in Moldova, Belarus and others. He was invited to lecture and hold various education courses on osteoporosis in Armenia, Georgia, Azerbaijan, Kazakhstan, Uzbekistan, and Mongolia.

Since 1998, the Ukrainian Association of Osteoporosis is a part of the IOF, while Vladyslav Povoroznyuk is actively participating in its proceedings.

He initiated the First International “Fundamental Problems of Osteoporosis” conference (1999) which resulted in convocation of the Joint Council of the National Societies of the Eastern European and Baltic states. Vladyslav Povoroznyuk was elected the Deputy Head of the Joint Council and the Editor-in-Chief of the “International Osteology Journal” created by the Council.

In 2002, Professor Povoroznyuk initiated the creation of the Ukrainian Association of Andropause, Menopause, Bone and Joint Disease, embraced by the EMAS later the same year.

In 2007, Professor Povoroznyuk and his colleagues from the national association unveiled the Ukrainian-Lithuanian-Belarus project “Study of the structural-functional state of bone tissue in children and adolescents residing in the regions of unfavourable environmental conditions”. He coordinated the project and outlined its aim: to study the state of the bone tissue of children and adolescents residing in the respective countries, especially in the environmentally compromised areas.

Professor Povoroznyuk holds an annual education course for the practitioners “Modern principles of diagnostics, prophylaxis and treatment of the bone-muscular diseases” (since 2006), informational and training course “Diagnostics and treatment of osteoporosis” and Conference of the Young Scholars (since 2007), school-workshops “Back pain”, “Osteoporosis in the rheumatologist’s practice”, and a series of scientific-practical conferences “Days of gerontology and geriatrics in Ukraine” (since 2010), “Deficiency and insufficiency of vitamin D in clinical practice” (since 2014).

His current field of academic interests includes epidemiology, pathogenesis, diagnostics, prevention and treatment of locomotor apparatus, its age-related changes and influence of the accompanying pathologies of various organs and systems.

In 2006, Professor Povoroznyuk commissioned the Ukrainian translation and adaptation of the IOF’s one-minute questionnaire (2 versions) and held studies to prove its validity. Results of those studies were presented as posters or reports at various international congresses and symposiums. Now he is actively involved in the development of the Ukrainian FRAX model which created in October 2016. Professor Povoroznyuk is a co-organizer of EVA study and All-Ukrainian STOP study of the incidence of osteoporotic fractures in Ukraine.

Professor Povoroznyuk researches, among other things, the trabecular bone score (TBS) and sarcopenia. Normative parameters of TBS were established for Ukrainian people of various ages. Povoroznyuk’s is a pioneer study on sarcopenia in Ukraine that establishes normative data of skeletal muscle system of women belonging to various age groups, sarcopenia’s development mechanisms, “cut-off’ of low muscle mass and frequency of sarcopenia in older women.

Professor Povoroznyuk was an academic advisor of 13 Doctoral and 29 PhD dissertations, one of them defended outside of Ukraine.

Since 2010, an annual Austrian-Ukrainian Symposium on osteology, initiated by Professor Povoroznyuk and Heinrich Resch, the President of Austrian Bone and Mineral Research Society (AUSBMR), is held in Vienna.

Professor Povoroznyuk actively participates in the WCO-IOF-ESCEO conferences. Last years poster studies supervised by the Professor were several times nominated among the 8 best ones and chosen for an oral presentation.

Professor Povoroznyuk is the Editor-in-Chief of the “Problems of Osteology” journal published by the Ukrainian Association of Osteoporosis and certified by the Higher Attestation Committee of Ukraine as an academic peer-reviewed edition.

In 2011, he created the scientific-practical “Pain. Joints. Spine” journal and became its Editor-in-Chief supported by the Deputy Editors – Professors Resch (Austria) and Reginster (Belgium).

Professor Povoroznyuk is an author or co-author of more than 600 academic studies, twenty monographs, among which – “Osteoporosis in Ukraine”, “Glucocorticoid-induced osteoporosis”, “Osteoporosis: epidemiology, clinical features, diagnostics, prophylaxis and treatment”, “Menopause and osteoporosis”, “Menopause and bone-muscular disorders”, “Pamidronic acid in treatment of bone-muscular disorders”, “Experimental osteoporosis”, “Sarcopenia”, 46 guidelines and 35 copyright certificates in epidemiology and methods of diagnostics, prophylaxis and treatment of primary and secondary osteoporosis and its complications, osteoarthritis, gout and back pain. Since 2007, Professor Povoroznyuk also edits a collection of studies for the practitioners “Modern principles of diagnostics, prophylaxis and treatment of bone-muscular disorders in people of various ages”.
http://orcid.org/0000-0002-9770-4113

In 2010, the results of numerous epidemiological studies supervised by Professor Povoroznyuk were presented in the Eastern European and Central Asian Audit, under the aegis of the IOF.

Professor Povoroznyuk is a co-author of such European editions as «New Europe: Consensus on Osteoporosis» (2003), «The Eastern European & Central Asian Regional Audit Epidemiology, costs & burden of osteoporosis in 2010» (2011), «Practical guidelines for supplementation of vitamin D and treatment of deficits in Central Europe: Recommended vitamin D intakes in general population and groups being at risk of vitamin D deficiency» (2013).

Dissertations, defended under the advisor of Professor V. Povoroznyuk